The free solution for electrophysiology.

Free as the Freedom. 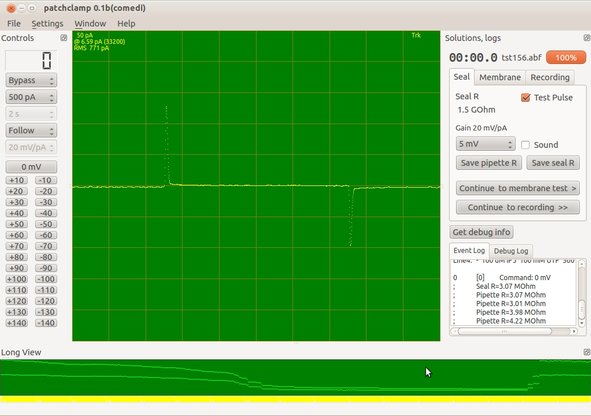 Fig.1. The main program window during gigaseal formation. The gain of AxoPatch 200B amplifier was switched from 2 mV/pA to 20 mV/pA (as seen in the right part of  a bottom window).  Cells used are SK-N-SH.

04 June 2020: A five-year development break due to me switching to ECG analysis field might end soon. Working on transition of the programs to Qt5. Also, shrunk the website to just five pages.

21 Jan 2015: I have spent a lot of time working on microelectrode recording program and tissue impedance program. Development of the main program is still on hold. There is some progress on the episodic stimuli designer, though.

27 May 2014: version 1.0 released. The configuration utility 'comediinfo' became 'daqconfig' and in future it will be able to configure the program for the intracellular recording.

3 Jul 2013: Version 0.99 released today.  All the major bugs seem to be fixed, as well as the minor ones - although undoubtedly some bugs them should still be lurking somewhere. The program is good for continuous data acquisition using AxoPatch 200B.

5 June 2013: After some struggle with multi-threading issues a new (this time single-threaded) version (0.2) is on its way. The internal beta testing should end on June 10th or a bit later.

4 March 2013: A major update for the comediinfo: now it does the softcalibration all by itself.

14 February 2013: A few bugs have been fixed, and a soft calibration routine has been added.  Ubuntu binaries and the source code of  version 0.1d are now available on the SourceForge.

5 February 2013: We have got one more developer in the team. Alexey Pupyshev will be focusing on the whole-cell recording tools and issues.

29 October 2012: The beta-version still goes through the pre-release checks. Some support for the  Warner PC-501A amplifier has been added.

16 October 2012: The tiny tool to configure your DAQ card  input/output channels is available for download.  Please check the Downloads section.

1. The ultimate aim is to build the free tools for the very common tasks in cell electrophysiology: recording single channel and whole-cell currents.

2. The secondary aim is to make these tools very easy to use, concentrating on features the researcher needs frequently, and leaving out everything else. And if one needs some special features- the sotware is open for modifications.

3 The tertiary aim is to make the design extensible and customizable. The researcher should be able to see the inner workings of his tool and able to change what's going on with ease.

You will need a two (or more) core PC with 1 GByte of RAM runing Linux, and a DAQ card that is supported by the Comedi library.

Please  take a glance at the REQUIREMENTS tab for details.

At present time the program is limited to acquiring two analog input channels at frequencies of 1-10 kHz (one for membrane current and another for  the membrane potential). The maximum experiment duration is limited to 60 min and 4.000.000 samples for now.

1. To run the program you need the Linux  operating system, which is modern, configurable, and can be made very lightweight. You really do not need gigabytes of proprietary code to run the relatively simple data acquisition software.

2.The data acquisition library we are using is Comedi.  Some proprietary solutions might be more powerful, but freedom is well worth making more effort.

3.The user interface library we use is Qt, and the language of choice is C++. Just because we happen to like them. And we like them because they are portable, efficient, and free.

The program is distributed under GNU GPL v2. It is free; but the manual and tech support are not supposed to be so. Please notify me if you are publishing the research paper using the program.

Any donations to support the development are greatly appreciated, preferably as code contributions.

Please note that although every effort is done to make this program bug-free, you are using it at your own risk. We will not assume any liability for this program. The program is supplied "as is", without  warranty of any kind, either expressed or implied. See the parts 11 & 12 of the GPL license, please.